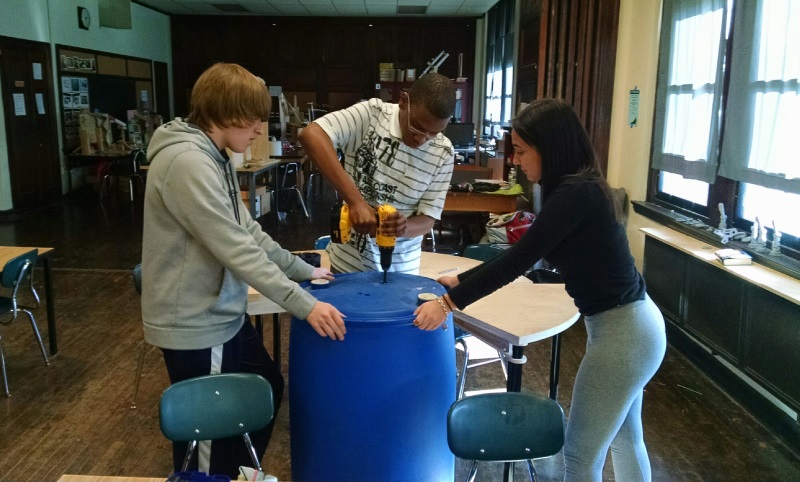 Wish we could say no rain barrels were harmed during this week’s minicourse at SLA Beeber but, as the photo above indicates, that simply isn’t true. Ninth grade students have begun to imagine a smarter, more functional rain barrel for Philadelphia residents and businesses to manage stormwater on their property. This week, one group of students worked in the makerspace to build an enclosure prototype for the rain barrel while the other group investigated different sensors to measure water level in the barrel and figure out how the sensors fit into the physical design.

As with last year’s solar-powered birdhouses, greenSTEM is collaborating with Public Workshop to guide the students in designing and building a functional addition to their schoolyard and garden. We’ll be documenting the progress here—sharing the designs, code and challenges along the way. 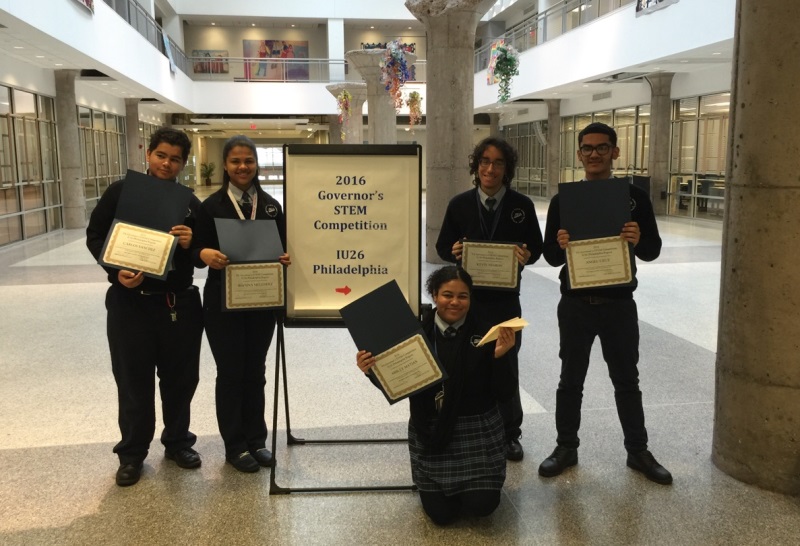 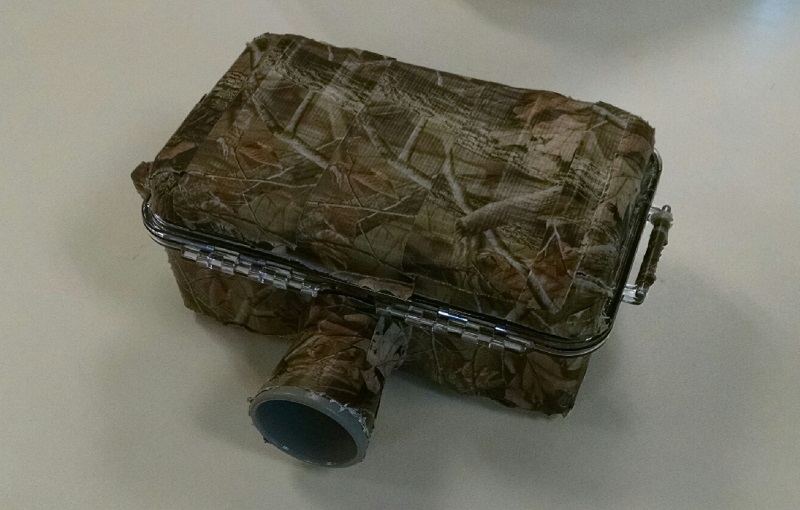 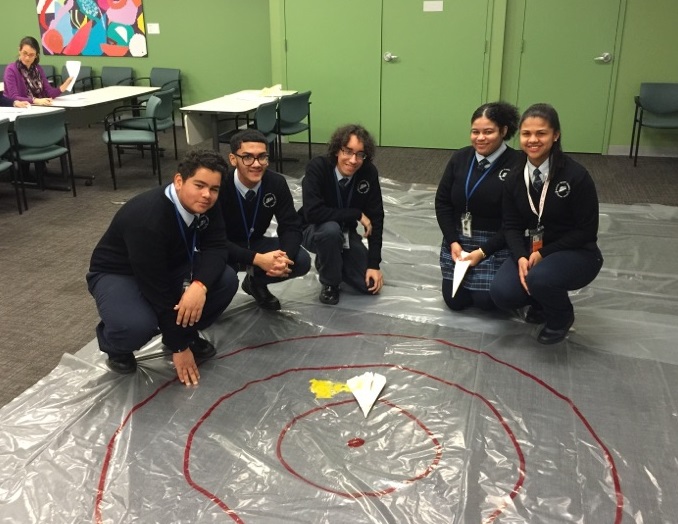 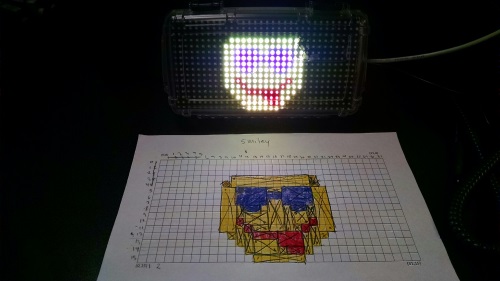 On Saturday, more than 20 middle-school girls gave up an unseasonably sunny afternoon to hack with Arduinos. Philadelphia Water’s greenSTEM project hosted a free TechGirlz workshop at Moore College of Art to explain how low-cost electronics and sensors can be used to help the environment, improve our cities and neighborhoods, and connect the real world to the virtual world.

We hit the ground running by setting up with Codebender, a browser-based Arduino programmer that takes much of the pain out of installing software, drivers and libraries on two dozen different computers. We quickly moved to a modified version of the Arduino blink activity and then tackled an art project: programming designs onto a 16×32 LED matrix sign using an x,y grid, geometric shape codes and color codes. This was hard work—many lines of code were written with intense focus. 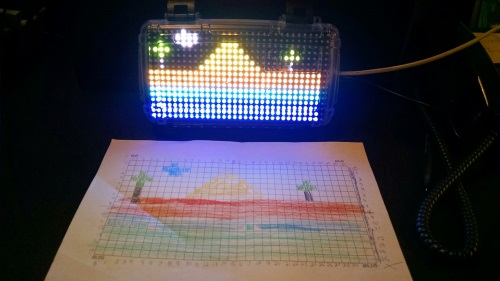 Thanks to the girls for attending, to our TechGirlz volunteers, and to Moore College for providing the space. 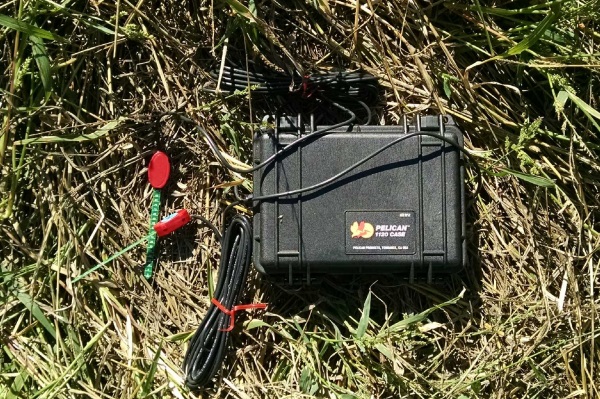 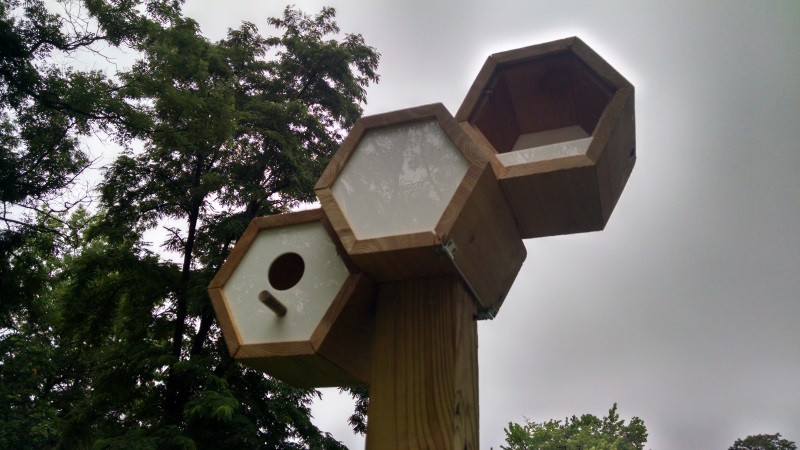 Now available: summer rental, 1BR with porch, ready for move-in at Science Leadership Academy’s Beeber campus. As detailed in a previous post, a group of 9th graders at the school spent the last 8 weeks designing, prototyping, and building solar-powered, webcam- and sensor-enabled birdhouses (and one bat box). Philadelphia Water and Public Workshop worked with the students to hone their ideas and craft the houses in the school’s excellent makerspace. Students Amani and Aaliyah worked on this honeycomb design that’s perfect for cavity nesters such as sparrows, wrens, and chickadees. The middle compartment is sized to contain the electronics and infrared nest camera. 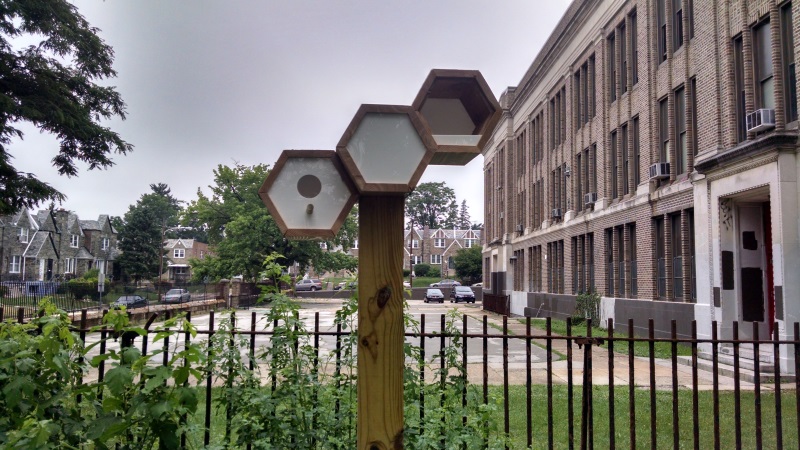 Installation in the schoolyard came down to the very last day of school, so the majority of the observing, sensing and solar-powering will take place when classes resume in the fall. Two other birdhouses and a bat box are nearly ready for installation, too—we’ll be scouting locations around the city for them to be installed. 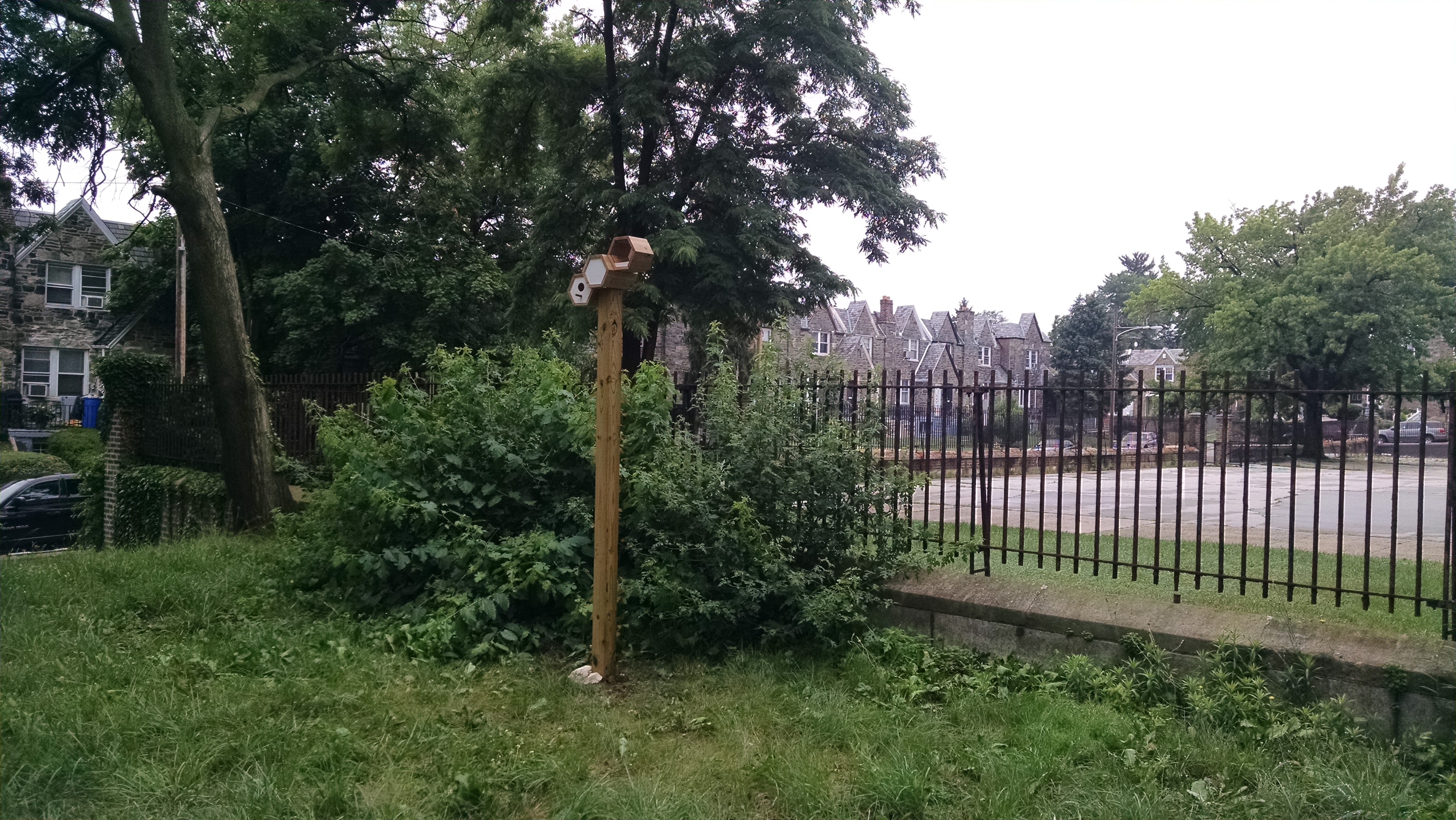 Thank you to Public Workshop’s Alex Gilliam and Jason Depenbrock, as well as sophomore Brodie Bauman, for their design and construction expertise. Additional thanks to Drexel’s ExCITe Center for purchasing materials. Summer is here but we’re still working—wait until you see the other designs. 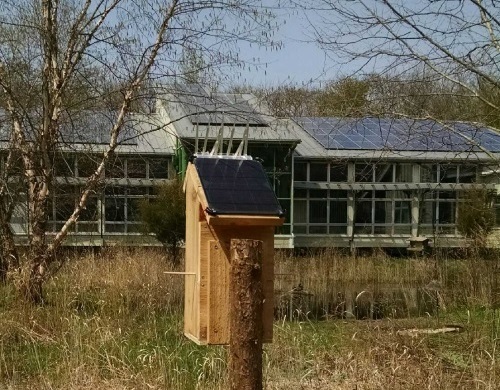 We are much belated in posting this news, but the first greenSTEM birdhouse was not installed at a school but rather at a wildlife refuge. The John Heinz National Wildlife Refuge at Tinicum has long been one of our favorite green spots in Philadelphia. Easily accessible from I-95 near the airport, it’s a true urban refuge: Even as planes fly overhead and highway traffic blurs in the distance, you’re enveloped in 1,000 acres of freshwater tidal wetland and forested hiking/biking trails. It’s also a birder’s paradise, as hundreds of species of birds can be spotted at the refuge over the course of the year—from migratory shorebirds and raptors to turkeys and cavity nesters such as swallows and sparrows.

When we began building birdhouse prototypes, we met with deputy refuge manager Mariana Bergerson and wildlife biologist Brendalee Phillips to get some design tips, configure a wifi connection to stream nestcam video, and figure out placement. The last part was easy—the refuge’s visitor center has solar panels on its roof, so we put it in the meadow and aimed our solar panel the same way. See photo above—you’ll also notice some perches on the side of the birdhouse and spikes on the roof to prevent birds perching (and subsequently pooping) on the solar panel.

Birds moved in almost immediately. It’s an ongoing saga, but after the jump we begin the story of swallow vs. sparrow.

END_OF_DOCUMENT_TOKEN_TO_BE_REPLACED 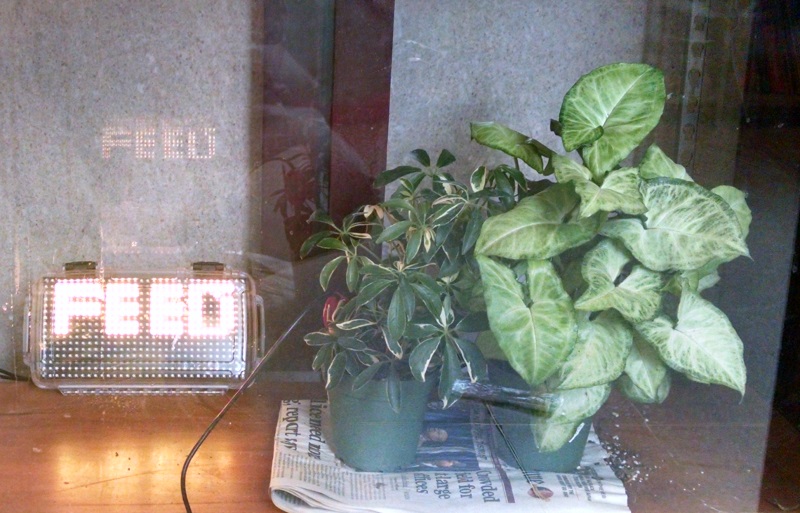 In our last post, we detailed how soil moisture sensors and datalogging are not exactly the cure for dead plants (or neglectful students). The next step at SLA Beeber was to give students blindingly bright visual cues as to when their plants required watering. Along with taking soil moisture readings and determining a wet or dry state, students programmed their own designs onto an Arduino-powered LED matrix. Remember Lite-Brite? It’s kind of like that, except it’s coded in Arduino using an x-y coordinate system, geometric shape commands and color codes. Students began by sketching their designs onto a 16×32 grid, then breaking the grid into rectangles, lines, and pixels as lines of code: 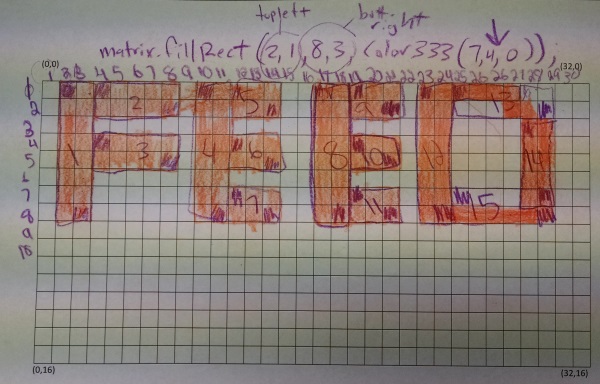 Adafruit has an excellent tutorial on how to wire this to the Arduino and program it. We put the display inside a Pelican case to keep it dry and set it up in the school’s hallway, where one can only hope the plants’ occasional pleas for water will catch someone’s eye.

At Science Leadership Academy’s Beeber campus in Overbrook, 9th grade students are learning to program Arduinos to collect soil moisture and sunlight data. The course began with a trip to the Fairmount Water Works to get some background on Philadelphia’s water history, its present challenges due to stormwater and combined sewer overflows, and the plan for an environmentally sustainable future. On the tech side, we’ve covered Arduino basics, Ohm’s Law, simple circuit design (in the photos above, Fritzing came in handy to help students visualize circuits), and the principles behind soil moisture sensors and photocells.

Each student used a datalogger shield to monitor a plant. Alas, monitoring does not equal maintenance. There’s only one bit of green in this otherwise barren dirt farm: 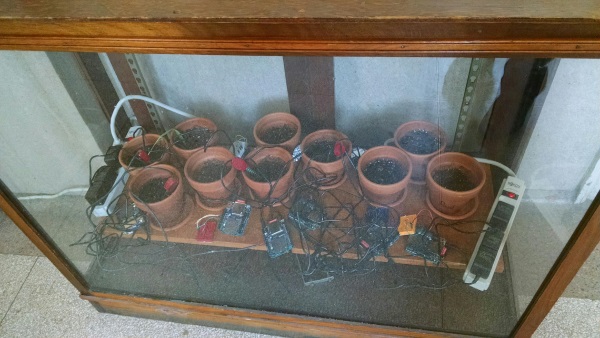 In the coming weeks, we’ll figure out more attention-grabbing ways to make sure students are looking after the plants. (And perhaps a solution to that mess of wires.) Thanks to Drexel University’s ExCITe Center, whose Seed Project funding brought all the electronics and sensors into the classroom. 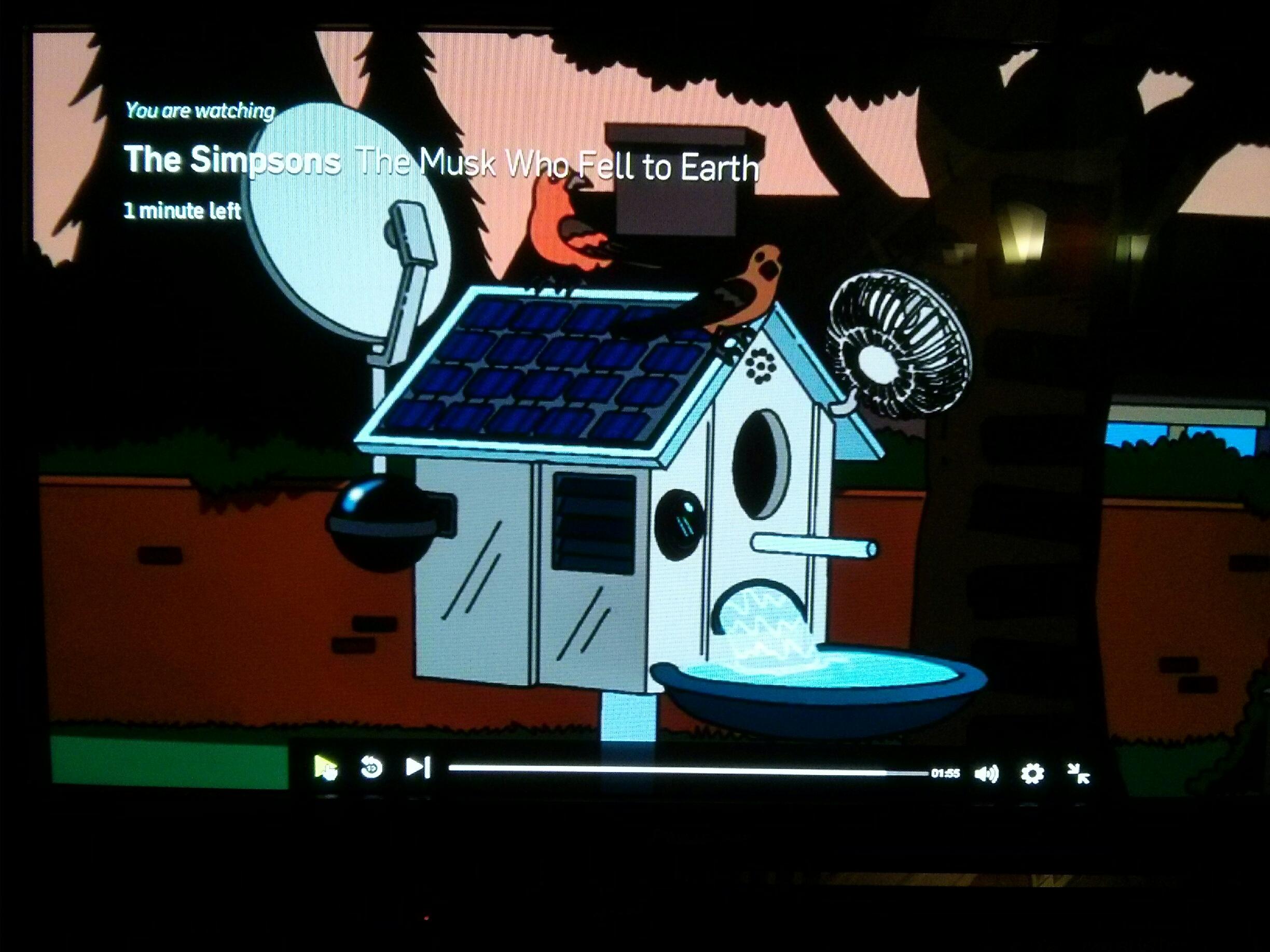 In an episode of The Simpsons last month, inventor/entrepreneur Elon Musk lands his rocket in Springfield and builds Lisa a futuristic, solar-powered birdhouse. (Some other things happen in between those two plot points, but we’re summarizing.) Not bad, Mr. Musk. Here’s our version: 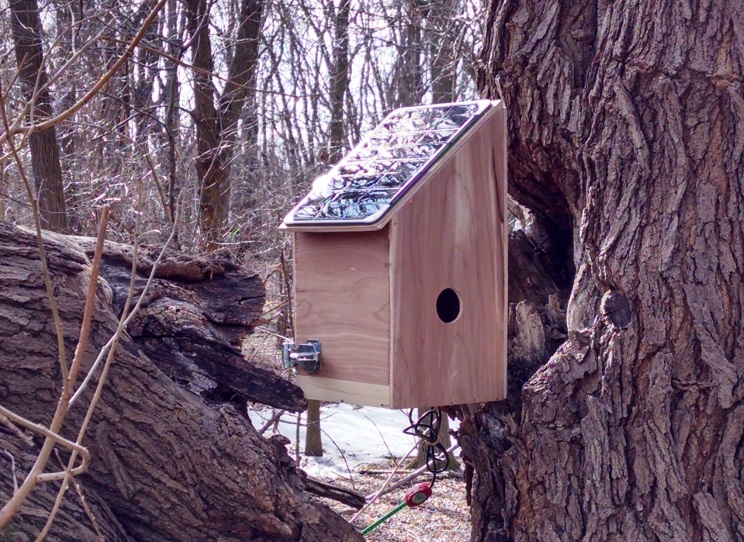 Many more details to come as we design, prototype, and test solar-powered birdhouses equipped with environmental sensors and infrared video cameras live-streaming to the web. Another version of the birdhouse above is already in the works. Alas, none of our birdhouses have satellite TV or a swimming pool. We just don’t see where there’s market demand for that. 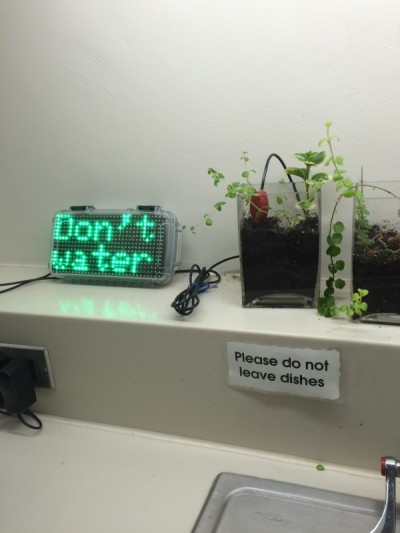 Now on display at the Fairmount Water Works—a simple soil moisture sensor with an LCD display to keep track of a plant’s watering needs. This is just a first step in developing some really interesting ways to monitor plants and get feedback on plant health. Working with two 10th grade students at Science Leadership Academy, we’ll be investigating how to use visuals, audio, and Twitter to communicate environmental data.  (We’ll also be investigating why we didn’t put the electronics in a waterproof case, because what’s more awesome than an unprotected circuit board next to a plant that’s being watered?)

This setup uses an Arduino Uno ($25), a Grove base shield ($10), a Grove LCD display ($14) and a Vegetronix VH400 soil moisture sensor ($37, though you can find soil moisture sensors for under $10; we like the performance of the VH400). The Grove shield stacks on top of the Arduino and lets you use snap-in wires to connect sensors and displays. The Arduino code is after the jump; it’s basically modified code from the Grove website.

We did a rudimentary calibration of the soil moisture sensor and got readings for the sensor in air, in dry soil, in wet soil, and immersed in water. From those measurements, we estimated readings below 200 would probably indicate the plant needs watering. It’s not an exact science, but we’ll learn more about what the sensor output means as we go along.