Better late than never, a large amount of inspiration for the Solar Sunflower project came from the Stroud Water Research Center, particularly this web page. 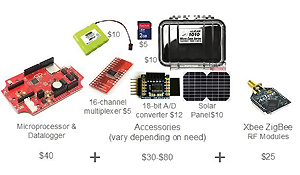 The image above from Stroud’s website illustrates just how far open-source consumer electronics have come; for a couple hundred dollars, you can build your own sensor network. This is something that was previously off-limits to most civic and non-profit groups—the commercial alternatives cost thousands of dollars. The freedom (literally) afforded by the low cost of these electronic components is important. Sometimes you only want to monitor for a short period of time. Sometimes you have no idea how a sensor will work until you try it out in the field. Sometimes you’ll need to customize your monitoring setup. Arduino and other similar microcontrollers are modular: Switch out the sensors, change the way you power them, try, fail, and try again.

Also worth shouting out is dontflush.me, another fascinating water-related project using real-time low-cost sensors. Arduino-powered sensors detect when a combined sewer overflow is occurring in New York City and lets viewers of the website know not to flush a toilet during these overflow events. (The logic is that flushing a toilet during an overflow would contribute more sewage to the overflow.)