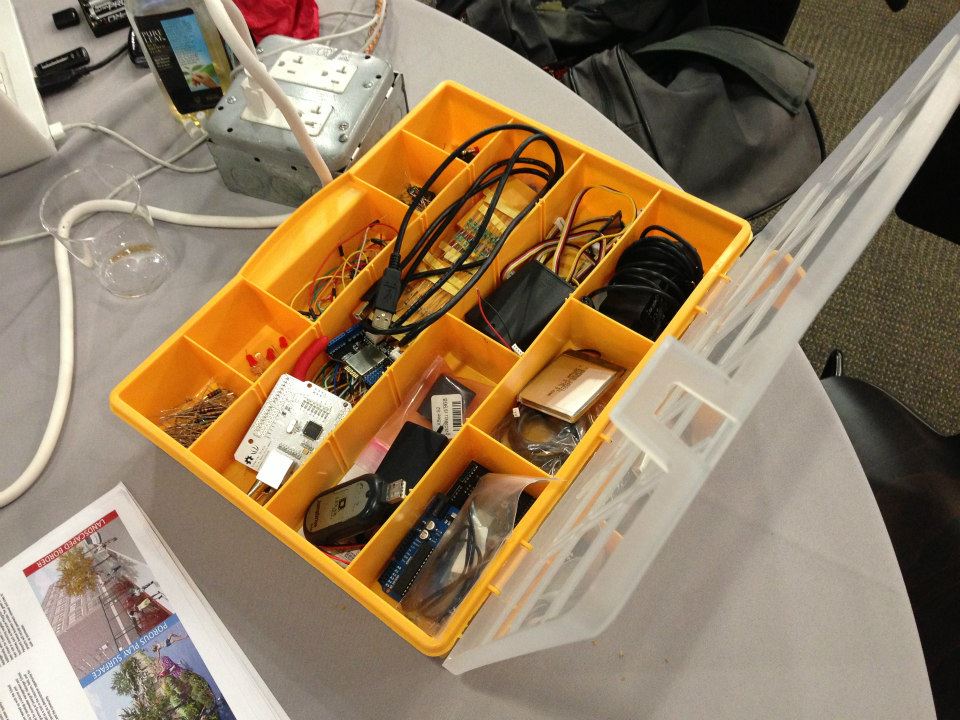 This weekend, the Solar Sunflower project was selected as one of 5 finalists to advance to the Switch Philly event on April 23 and compete for a $5,000 prize. The field was narrowed down at the AT&T EduTech hackathon at Temple University on Saturday. Like TechCamp, the hackathon (organized by AT&T, Jarvus, Technically Philly and Temple’s Urban Apps and Maps Studio) focused on using technology to improve education. Some of the other projects included a mobile app that helps students find the safest walking route to school; a game app that uses a fantasy-football approach to tracking learning progress; and an app that connects students with tutors.

Not all our team was there, but Chris Nies and I were able to present a working demo of real-time sensor data being posted to the web in front of an audience and a panel of judges. It sounds pretty rosy in hindsight, but to be honest we spent hours just trying to send data via Temple’s WiFi network; these things happen. Thanks to Jarvus’ Chris Alfano and Technically Philly’s Brian James Kirk for their support and encouragement.

Here’s Technically Philly’s coverage of the event. We stole their photo of our box of Arduino stuff, above.

We’ve been hacking at a hackerspace for our next hackathon. For me, the term “hacking” is one of the more egregious tech misnomers, because it seems to imply taking something apart. Of course, it used to mean something different (such as breaking into a computer system) but all I ever see at hackerspaces (places where hacking occurs) are creative people making new things by grabbing data from the web, modifying code and bending it to their will. Devnuts, in Northern Liberties, is where we’ve been gathering on Tuesday nights for the Code For Philly meetups. That’s not us in the photo of the Devnuts space above, but you can spot Code For Philly organizers Christian Kunkel and Chris Alfano (who also work at Jarvus Innovations). The Code For Philly meetups are a great way to get started on a project, learn a new tech skill, or just see what people are doing. The sense of community is amazing, and we’re grateful for all the time and resources that Chris, Christian and others put into organizing the event.

In addition to Devnuts, there are many other hackerspaces in Philly worth checking out. Last week, I visited Hive76 and spent a few hours soldering a circuit board. Thanks to those guys for their advice and letting me use their equipment. I hope to someday visit and use NextFab studio, which is more of a building/manufacturing space that might be useful when we start to build the sunflower and the waterproof housing for the sensors. I’m sure there are many more venues out there—many have an open house night or introductory workshops for the uninitiated.

Anyone who wants to keep up with the tech scene should bookmark Technically Philly. The site is fairly relentless in documenting all the events and news that involve local startups and tech projects.

But as mentioned before, there’s a hackathon coming up: The AT&T EduTech hackathon at Temple University on April 6. We’ve smoothed out the kinks in our code and have the Arduino posting sensor data to the website. On the wish list is a multi-line graph to plot the data in real time on the site.

Is my Latin wrong? Missing from the previous post about the TechCamp hackathon were some of the details about our progress and what the next steps are. So here’s what we did: 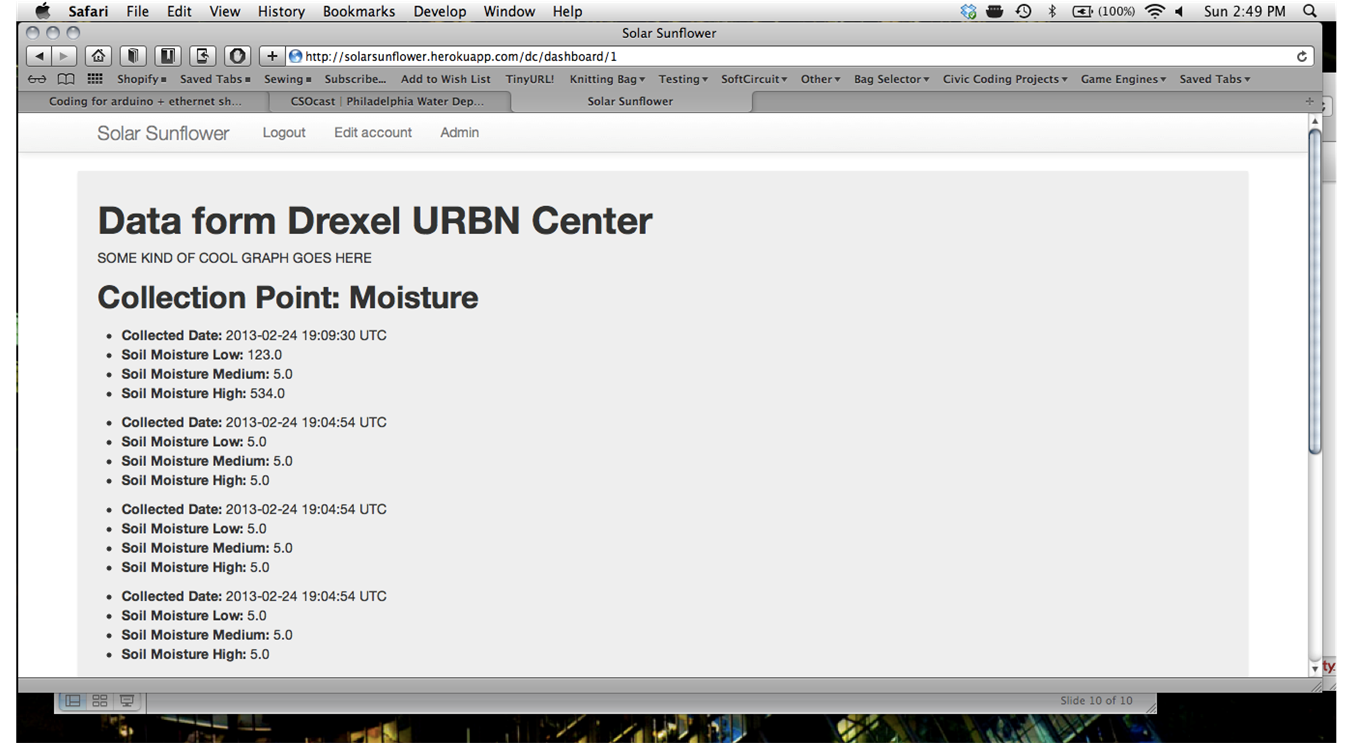 As you can see, it’s just a skeletal version of a website. The important thing is the transmission of the data values. But we came away with a definite to-do list:

Construct the housing and sunflower: 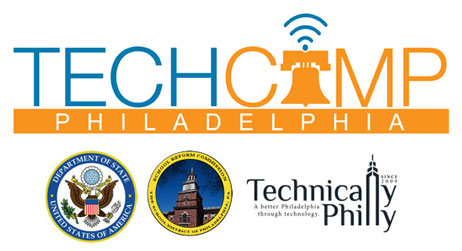 What just happened? This weekend, the sensor project idea got picked up at a hackathon, gained a whole team of technologists, and is on its way to wirelessly transmitting data to a website with a fully functional database. My first hackathon was a blur of activity, and that’s probably an apt working definition of a hackathon. But for accuracy’s sake, here’s the background on this weekend’s event:

TechCamp is a U.S. State Department program that connects technologists (I don’t like this word, btw) to people who are trying to solve social problems. Many of the previous TechCamps took place in cities in developing countries, and as far as I’m aware this is the first domestic event. It’s a sign of the times: Co-sponsored by the School District of Philadelphia and Technically Philly, this hackathon focuses on our city’s public schools and finding ways to use technology to improve education and administration. The two-day hackathon—the part where programmers and software developers work on a project, such as a mobile app for students—was only one element of TechCamp, but it was the part that enabled the Solar Sunflower project to grow some legs.

In democratic fashion, the hackathon at Drexel University’s URBN Center began with people contributing project ideas to a whiteboard; groups formed based on interest and requisite skill sets. (Special thanks to Paul Fugazzotto, from PWD public affairs, for attending the first day and helping to generate interest for the sunflower.) I was lucky to get hooked up with three really talented programmers: Christopher Nies, a Python developer; and Kevin Clough and Jason Blanchard, both of whom do development with Ruby on Rails (more on that shortly). Here’s some of our team working in the foreground this weekend: 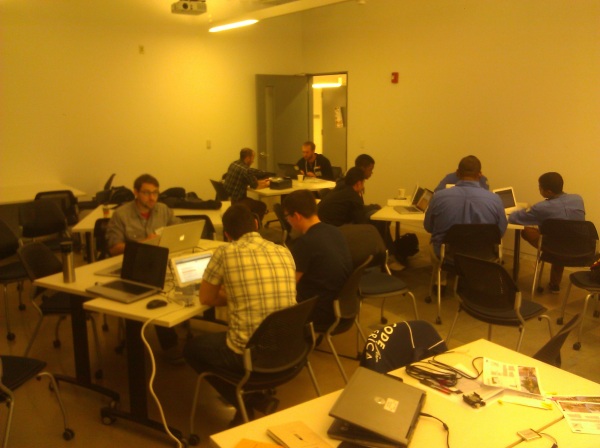 After I explained the project and gave some background information, Chris, Kevin and Jason had a plan of attack in place within minutes: We’re going to send JSON packets containing sensor data over wifi from the Arduino to a Ruby on Rails application running on Heroku. You got that, right?

Let’s try that again. The Arduino is going to hook up to a wireless network. In our case, it would be the school’s network (special thanks to School District of Philadelphia IT personnel—Melanie Harris, Phil Ichinaga, Sam Garst—for their support of the project). It’s going to send sensor values in a data structure called JSON, which stands for JavaScript Object Notation. JSON is kind of like the envelope that holds a letter: It is code that encloses the data in a simple, lightweight wrapper that is human-readable and easy to work with. Inside the JSON code you might specify the location of the sensor (site name), an ID for each sensor (soil sensor 1, soil sensor 2, etc.), the actual data value, maybe even a timestamp. The server is then configured to receive the data so it knows what to expect from the packet.

Now the most difficult part (for me, at least): Ruby on Rails. Ruby is a programming language, like Python or PHP or C++. Rails, on the other hand, requires a little more explanation. It is a web application framework that runs on Ruby. Oh right, a “web application framework.” I’m sure the finer points of Rails will reveal themselves in time, but for now I’m satisfied to know that it provides a way to build websites quickly, using less code than other approaches. (Full disclosure: Although I do consider myself a novice at programming, I have experience with HTML, CSS and other website-related things.)

Heroku is a cloud hosting platform. It’s a place to put a website. It’s free, up to a certain point of usage. This makes it a smart choice for projects under development.

Most of the progress made during the hackathon involved getting the server and website set up, programming the Arduino to talk to the server, and wiring up the sensors. Throughout, we had many people—educators, scientists, students—stop by our table to learn about the project. While I mainly preached the gospel about green infrastructure and stormwater management to our many visitors, Kevin, Chris and Jason did the heavy lifting on the tech side. Here’s a shot of our setup:

In the photo above, we have three soil moisture sensors wired to a breadboard (a plug-in board that lets you connect circuits without soldering wires) and connected to a Bluetooth shield. We ended up not using Bluetooth to transmit data; to the right of the breadboard is an Arduino and Ethernet shield that provides a better way to connect to the web. (Connecting via wifi is on the to-do list; we just wanted to test our connections to the server and Heroku site.)

Even though I arrived with a duffel bag full of electronics—Arduinos, sensors, breadboards, cables—at one point I had to steal away to Radio Shack to buy the Ethernet shield for the Arduino. It cost around $20. Now, I’ve become a semi-regular customer at various local Radio Shacks since embarking on this project, and I’ve never underestimated the base-level weirdness of the Shack’s clientele. But this time was special: A lady, perhaps thinking I worked at the store, asked me which digital converter box would scramble signals from her TV … because the people from the TV were accessing her brain and stealing her thoughts.

But I digress. Our team wasn’t able to do a live demo of the sensors transmitting data to the web, but we gave a solid closing-night presentation in front of a great audience of educators and the tech community. Best of all, the team resolved to keep working on the project, and we’ll get together at Code For Philly meetups in the future. More than anything, I was astonished at the level of interest and support for this project and hope to keep the momentum going.